the way they met…

“Did I catch you off guard doing naughty things?” Voice soft as slowly falling snow asked as the door of her apartment opened.
Gaia pretended to laugh. “Yeah. Extremely naughty actually. Drinking tea.”
“That can be very naughty.”
“Right…” 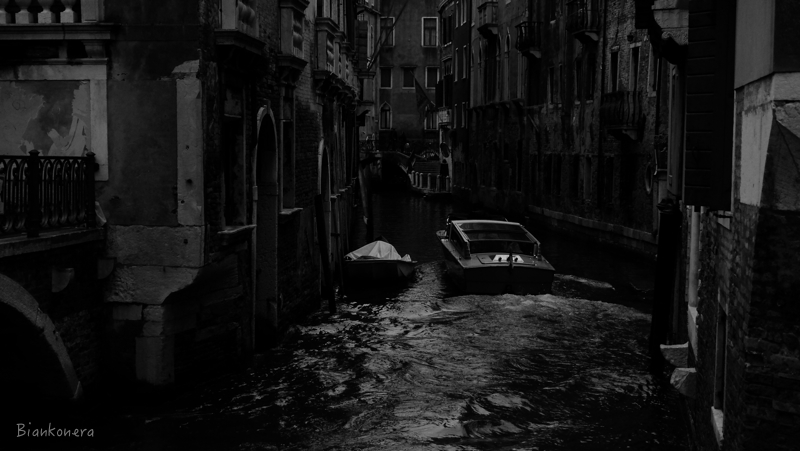 She had first met the owner of this voice on a sort of a transformed mototopo of all places, a large boat  meant to carry goods around the city, that had about twice as many people on board as it was ever meant to have. It was captained by a bold guy with strange tattoos on his head who looked like a half-crazed extra from a vampire movie. The people on the boat, some 25 of them that night, had been slightly intoxicated (due to the party they all had attended or spumante or maybe the cause was something else, who knew) and the undead-looking man had been taking them home, steering the boat through the poorly lit canals.

They hadn’t talked then, Pietro and Gaia. Pietro, an artist who drew portraits during the tourist-populated times, had not talked to anyone on the boat in fact. He had just watched the play of shadows, or so he had later claimed, although in reality he had watched everyone and Gaia in particular.

Their first conversation had happened that same night but in a completely different place. In a hole in the wall osteria in some part of Venice Gaia had never been to before. Even till this day – two years on – she wasn’t sure it had been real at all, for it had had a distinctive feeling of a place that had little or nothing to do with reality. She had tried to find the place on her own several days later but had never had any luck. And so she cherished what she had left of that night – memories of a dangerous-looking bartender who had been making a cocktail he called spritz, but that hadn’t tasted like spritz (for spritz had no chance of tasting this divine), of some hooded guy who was playing guitar on a tiny stage – which was that only by name – next to the bar with his back to the audience, of ceiling that had been far too high for the tiny space and disappearing into the darkness, of half-plastered stone walls and of candles – candles everywhere.

Gaia had often thought of that night. And the more time went buy, the less certain she was that it hadn’t been just some wild dream.